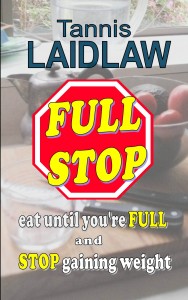 This is the back cover:

Convincing, frank and down-to-earth, this book may change your life.

In this fascinating exposé of accepted dietary recommendations written for the intelligent layman, Dr Tannis Laidlaw explores which science we should be ignoring. As Gary Taubes (Good Calories, Bad Calories or Diet Delusion) says, the nutritional science of the past century or so – the science that has received the most publicity that is, the science which has influenced governmental decisions –  has serious flaws. The good science has been passed over, discounted or overlooked with the result that both normal people and those with diabetes, heart disease or other disorders are urged by officialdom to change their diets to include more of the very dietary items that good science advises may be injurious.

Have you ever tried to follow a low-fat diet and found it unappetising, and not only that, you were perpetually hungry?

Did you realise eating food based on the low-fat hypothesis has little scientific evidence to back it up, even though most doctors and dieticians still recommend it?

Would you like to know what science is actually saying about the ‘wisdom’ of such a diet?

Maybe you have suspected that carbohydrates are the villains here, not fats.

FULL STOP – eat until you’re FULL and STOP gaining weight reveals how science backs you up. Despite all you’ve heard, no properly constructed scientific study has ever found that a high intake of natural fats was injurious to health.

As an internationally-published scientist, Dr Tannis Laidlaw discusses in layman’s language the exciting scientific studies that not only debunk conventional thought about low-fat diets but support a fat and protein-filled low-carbohydrate way of life.  For ordinary people struggling to keep their weight under control yet who want to eat healthily, this book has the science behind creating a way of living that suits you as an individual. Try it out and you will most likely find that you’re full of energy, your mind is wonderfully clear, weight slips away and you feel fantastic!

The Kindle version of FULL STOP is now available on :

and other Amazon sites around the world.

The paperback version of FULL STOP is now available through the Amazon sites, both UK and USA.

Tannis would love to hear from you! Email info@tannislaidlaw.com