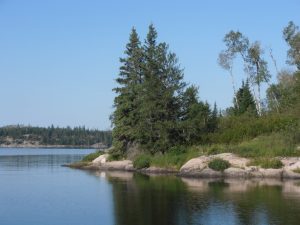 Just around the corner is the blueberry patch…

Blueberry season in Northwest Ontario is usually the last week in July and the first week in August, centred around the August Long Weekend (the first Monday in August). So we decided last week to check how the little green berries were ripening.

‘Our patch’ is at the back of Thunder Bay. No, not the city which was called Thunder Bay decades after my ancestors named that particular piece of water off the Winnipeg River with that particular moniker. In fact, the ‘thunder’ refers to the thunderous sound a train makes as it travels though the local tunnel there and reverberates around granite cliffs rising straight from the water’s edge.

Above the tracks is a long sloping hillside of base-rock granite which is a pinkish colour, decorated with silvery lichen and mossy patches of every hue. Areas of thin soil collect the water allowing shallow-rooted pine trees to take root and grow. At their base and sometimes in the shade, are low-bush wild blueberry bushes. We share the berries with the local black bears.

We clambered into our 15’ motorboat tied up at our dock in front of our little cottage, fired up the engine and chugged around the corner, past another couple of cottages to Thunder Bay. In 1908 when my grandfather first heard wilderness land could be had for the asking, he took a steam boat from Kenora to an area where the Canadian National Railway was being constructed. The boat tied up at Thunder Bay.  Pop (as did some of his fellow teachers) signed up for the free land, making sure he had a nice stretch of foreshore and started the family tradition of summers at the lake. In 2018 over one hundred years later, we will have generations three through five gather for all or part of the northern Canadian summer from New Zealand, southern Texas, British Columbia, Alberta and Bali, Indonesia as well as almost-local Winnipegers.

At the edge of that sloping rock, we hopped out, tied up the boat and set off across the tracks to the blueberry patch. To our complete surprise, the blubes were already abundant, over a fortnight early, due probably to long stretches of very hot weather coupled with a damp spring. We quickly filled a recycled one litre yogurt container with blubes and picked a decent lot of wild raspberries as well. Riches!

Day before yesterday we set off again, this time late in the day to take advantage of the shade the pines could offer. The temperature was about 30 degrees C (about 86 F)at 6 in the evening with a small breeze, so good picking weather. We filled our yogurt pots to the brim and set off back to the shore for a dip and wiener roast.

What could be more perfect? A swim in the fresh waters of the lake, pickles and tomato sauce and olives and … yes, everything we could think of to eat along with those wieners and a glass of wine, then fresh-picked organic wild blubes for dessert. The sun was still high in the sky and nobody else was around.