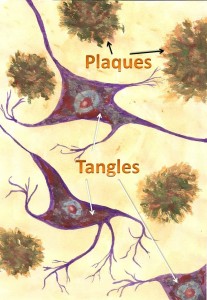 ‘Your mother died of Alzheimer’s?’ my friend the biochemist asked. ‘How is it affecting you?’

Well, the impact of my mother’s Alzheimer’s affects all her children. We find out something new about Alzheimer’s and we email each other all over the world. Even my adopted sister whose biological father also had Alzheimer’s is, of course, in the loop.

‘Reading. Yes. But are you doing anything about it?’ my friend asked.

First, the basics where no controversy exists (the controversial stuff is coming…) – all authorities agree that three mighty things can help:

My friend was almost yawning. ‘Those three are recommendations for good health anyway,’ she said. ‘Is there anything you do specifically designed to be anti-Alzheimer’s?’

Well, yeah. All that reading has influenced what I put into my mouth.

First, as many of you know, I have cut way down on how many carbohydrates I consume. Mostly my carbs come from fresh vegetables and a little fruit, some home-made yogurt and a tiny bit of dark chocolate. Anything good for the heart is also good for the brain. So I eat natural saturated and monosaturated fats and very few carbs. Okay, this is one of the controversial aspects of my anti-Alzheimer’s programme. But there is scientific evidence out there. A diet high in carbs promotes bad cholesterol; a diet low in carbs but full of good fats is heart friendly. Thus, brain friendly. (By the way, a relevant question: Do you know what the brain is made up of? Answer: a high proportion of cholesterol. True.)

I also make sure I eat a couple of teaspoons of the mild spice turmeric every day. Turmeric contains curcumin which is a powerful anti-inflammatory. Many scientific studies into Alzheimer’s disease postulate that inflammation is very likely involved in the devastating presence of plaques and tangles in the brain, the signature of Alzheimer’s disease (see my little painting of what they sort-of look like under the microscope) and the cause of loss of memory and deterioration of the very essence of the personality.

I also make sure I eat a couple of tablespoons of coconut oil and extra-virgin olive oil (EVOO) daily too. I mix them into my breakfast ‘cereal’. EVOO has some recent good evidence that it facilitates brain health and coconut oil has a mass of anecdotal evidence with a score of studies on-going right now. It’s a food that maybe can do some good, so I eat it. But I’m watching the science carefully, like lots of people.

I also take some supplements, all of which come from scientific studies. I take some co-enzyme Q10 (did you know the discoverer of Q10 got the Nobel Prize?); a multi-B vitamin supplement; folate (folic acid is given to every pregnant mother to protect her unborn baby from brain disorders; it’s also found in green leafy vegetables, so I supplement it) and Omega-3 fish oil (again, what’s good for the heart is good for the brain).

Taking supplements is easy. Eating coconut oil and EVOO is easy too. Even cutting the carbs and increasing the veggies is not too difficult (and I love both being slimmer than I was and never being overly hungry between meals). What’s the difficult part of my regime? Combating a natural tendency to be lazy and making sure I get enough exercise – both physically and mentally. And as I get older, it will become more and more important.

What I figure is, the time to get used to this aspect of healthy living is right now.

More, of course, on the whole diet theory in Full Stop: Eat until you’re Full and Stop gaining weight. Now available on Amazon (US):  http://amzn.to/1bfYvj8 and UK: http://amzn.to/1cXhZeV