I’m just recently home from a wonderful trip around the world. Of course, living in New Zealand means that if your itinerary takes you to Europe, it is easy to head there one way and back the other thus completing the round-the-world trip. We are exactly half way. In other words, we are the furthest one can be from Europe. However, round-the-world trips with a few stops here and there are not out of the reach of ordinary folk, as we prove, if you budget it in. And don’t drive expensive cars.

What did I do when there? I will dribble out some of the highlights over the next little while on this blog. But on this one, I thought I’d tell you about what I was writing, and how, while away.

We have two major destinations when we take these long trips (avoiding the New Zealand attempt at a winter…) – we go to our remote cottage in the wilds of Canada after travelling to Surrey in England to visit my father-in-law. He turned 93 when we were there, still lives independently and still does the Times crossword, the su doku and any other mind-games published in that venerable newspaper. He still gardens and sings in the church choir. He’s our model of how we all want to be when we’re over 90.

While there, my husband and his father do lots of father-son things (like sharing the crossword and tackling yearly jobs like pruning the wisteria) leaving me free to slip upstairs to the loft where I have a little office at the top of the house. I set up my laptop in front of a large west-facing window with a view from three stories high. I can see my father-in-law’s deep back garden with its little orchard, its wilderness area full of blackberries and his lawn edged with flowers (see a pic I took from the terrace). But up where I write, I can see into the neighbour’s gardens and across the south-western part of outer London. In the late evenings (we’re there in June so the evenings are very long), I have a perfect view of the sunsets. I watch clouds of parakeets swinging past my window heading for Hampton Court Palace and its extensive park plus myriads of other birds. And I write. 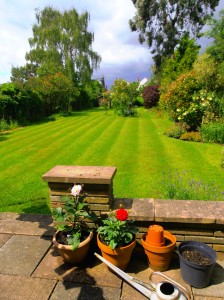 This year I concentrated on writing more than twenty 500 word stories. Some of you may have read one or two of mine which are on this blog. My goal when away this year was to take each of the Iron Writer Challenges so far and, using the four unique ‘elements’ which must be included, write up a story which can stand alone. This means the story has to have a beginning, a middle and an end; it has to convey some sort of emotion and the ‘elements’ have to be seamlessly woven into the fabric of the story so it all makes sense.

Winning the very first of the Iron Writer Challenges with ‘Hey Diddle Daddley’ (which can be located deep in the archive of this blog) inspired me to write up every one of the challenges for the first half year – a task my fellow author Dani J Caile and I decided to do. Dani launched his humorous book ‘Dani’s Shorts’ recently (https://www.smashwords.com/books/view/351327 ) and the one I wrote is almost ready. Mine will be called My Take on the Iron Writer Challenges, 1 – 26. We are doing this for a purpose, or maybe two purposes. The main purpose is to allow readers to have access to our writing. We intend to offer these books at a very small cost or free, enrolling them in the Amazon Library system that includes five free days. And we’ll let everybody know when those free days take place. Dani’s book is doing well so far. The other purpose? To publicise The Iron Writer (www.theironwriter.com ) where you can go read the current four contestants’ work and vote for the one you like best.

Why didn’t I get mine out when Dani did? Two reasons – packing up at the lake in Canada (no small feat), visiting friends on the way and flying back to New Zealand with quite a few jet-lag hours to make up. That’s my first excuse – Dani launched in the midst of all that. And my other and probably more valid excuse is that I wanted to put My Take through the capable hands of my critique group. It’s there now – feedback in a week. Then I’ll have to work on any problems they point out before, finally, launching it. So, a few weeks yet, folks, but I will let you know.

It’s lovely to be back in New Zealand as spring slowly takes charge.